The project, led by Professor of Applied Ecology Geoff Gurr (pictured above) from the School of Agricultural and Wine Sciences and the Graham Centre for Agricultural Innovation, has been recognised as one of the top eight projects in Australia and New Zealand for its exceptional community-building and economic-advancement. 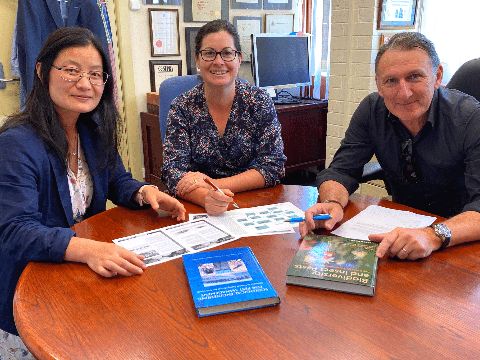 Professor Gurr said this win was great recognition for what has been a team effort over quite a few years, involving postgraduate and post-doctoral students, and collaborators within the university, and indeed around the globe.

“This project was initiated over 10 years ago when I began collaborating with colleagues across Asia to combat a very serious outbreak of pests in rice crops,” Professor Gurr said.

“This work was a roaring success and has since been adopted by tens of thousands of rice farmers in multiple countries, and is recognised national policy in China.

“The original project was driven by a crisis and we were able to find a solution relatively quickly; it also set the industry up to be more sustainable, and give farmers higher yields.”

Acting Vice-Chancellor Professor John Germov said the Novel Pest Management Program is an outstanding example of the impact Charles Sturt’s research is having on the world.

“Securing and growing food sources is one of the greatest challenges facing humanity,” Professor Germov said.

“On a global level this project supports the United Nations Sustainable Development Goals, and at our local level it resonates strongly with our University ethos of ‘yindyamarra winhanganha’, ‘the wisdom of respectfully knowing how to live well in a world worth living in’,” Professor Germov said.

“On behalf of Charles Sturt University, I want to congratulate Professor Gurr and his team on the innovative and collaborative work they have done.”

“Since that time, reflecting the success of the rice project we have worked with other industries particularly in Australia, and there has been huge interest from other countries,” Professor Gurr said.

Professor Gurr added that his team had recently been working on two projects with the Australian Research Council.

“One is looking at pest management in pine trees and another is developing a new product that farmers can apply to crops to attract beneficial insects,” he said.

Engagement Australia Chair and President, Professor Jim Nyland, said there has never been a more important time for Australian universities to become deeply engaged with their communities, and to align these transformational operations with their strategic priorities – from research and industry engagement to the health and well-being of the communities in which they serve.

“Our judging panel commented on the exceptional quality of the 2020 nominations,” Professor Nyland said.

Professor Nyland added that it’s also notable that three of the successful universities and individuals are from outside the capital cities.